“Everybody was in it from miles around…”

“Everybody was in it from miles around…” 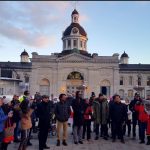 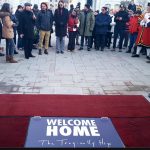 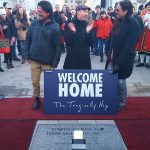 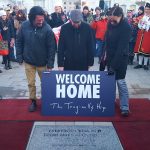 In a very special opening of this year’s Feb Fest celebrations, I was joined by The Tragically Hip band members Rob Baker and Paul Langlois to officially unveil the Hip commemorative stone in Springer Market Square. This new addition to Market Square pays tribute to a night Kingstonians will always remember, August 20th, 2016, the day when our city came together to support and celebrate Kingston’s hometown band.

A few days after the concert Ben McLean, from local radio station BigFM 96, threw out an idea on social media; why not commemorate this incredible event with a special stone in Market Square? It was a great idea and several months later the stone has been set in place. Thank you Ben!

The unforgettable evening was captured perfectly by the Hip lyric inscribed on the stone, located at the corner of King and Princess, ‘Everybody was in it from miles around…’ from Hip song Blow at High Dough. That August night more than 25,000 people filled Market Square, joining fans inside the Rogers K-Rock Centre and the millions of Canadians across the country. It was a national celebration and a moment we won’t soon forget.

I’m sure that in the months and years to come, countless visitors and residents of Kingston walking through Market Square will stop at this stone and reflect on what an incredible moment it was in our city. To me, this stone is the city’s way of saying thank you. On behalf of the City of Kingston, to all the members of The Tragically Hip, thank you. Thank you for your music, thank you for the memories, and thank you for all you have done over the years to support your hometown.

The video below, shown for the first time after the stone was unveiled, does a great job capturing the incredible atmosphere in downtown Kingston that evening.